On Wednesday, 11th of May, there will be a field trip to KVV EMC Sobacken CHP plant in Borås, a city approx. 60 km from Gothenburg.

The vision for today’s Energy and Environmental Center (EMC)  began as early as the early 2000s. The vision led to the decision and construction of waste boilers at Ryaverket, which was commissioned in 2004 and an accumulator tank in 2009. With these pieces of the puzzle in place, the work continued on strategies to replace the old bio boilers at Ryaverket, built in 1965. In 2011, a decision was made to build a new CHP plant and a new wastewater treatment plant. The location of the facilities was an important issue to consider for environmental reasons, and the choice eventually fell on co-locating both the CHP plant and the new wastewater treatment plant with Sobacken’s waste treatment facility.  The burners in the boiler were lit for the first time in December of  2018.

In terms of power, the CHP plant at Sobacken replaces the old biofuel-fired boilers at Ryaverket, with a boiler output of 120 MW thermal and 40 MW from flue gas condensation and air humidification. The turbine provides about 43 MW of electricity at full load. The plant is completely biofuel fired and the boiler is of the bubbling fluidized bed (BFB) type.

The boiler, flue gas condenser and flue gas cleaning were designed and supplied by Valmet, while the turbine was supplied by TGM Kanis Turbinen and the fuel handling system by BMH Technology. 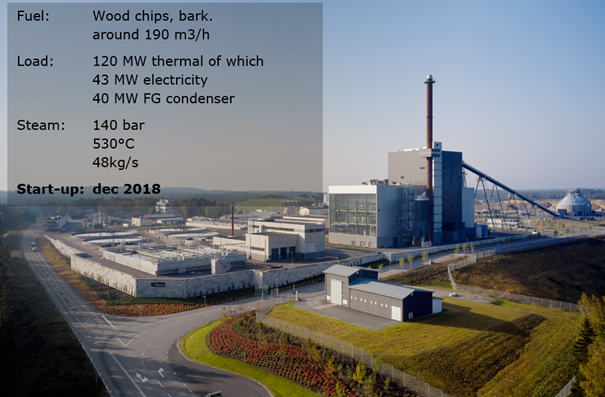